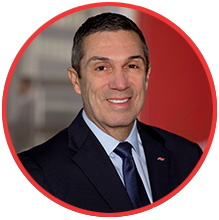 He began his banking career as a bank examiner and later joined Security Savings Bank in Jackson, Mich., where he ultimately served as president. In 1994, Security Savings was acquired by First Security Savings Bank, which later became Flagstar Bank. He continued with the combined organization as an executive officer responsible for growing the bank’s funding sources.

During his career at Flagstar, he has served as head of branch banking, retail product strategy, marketing, communications, internet banking, and branch expansion. He also was in charge of the bank’s technology, operations, and commercial units. Additionally, he led the government affairs and community relations initiatives. As CEO, he has played a critical role in strengthening the bank’s risk management, compliance, and quality control.

His business affiliations include membership on the board of directors of the Business Leaders of Michigan, the American Bankers Council of the American Bankers Association, the Detroit Regional Chamber and its Economic Development CEO Advisory Board, the Mayor’s Workforce Development Board, and the Executive Committee of the Mid Size Bank Coalition. He also is a founding member of the Detroit Sports Organizing Corp., and serves on the National Board of Trustees of the Crohn’s & Colitis Foundation.

Flagstar Bancorp, Inc. (NYSE: FBC) is a $17.7 billion savings and loan holding company headquartered in Troy, Mich. Flagstar Bank, FSB, provides commercial, small business, and consumer banking services through 99 branches in Michigan and eight branches in California through its Desert Community Bank division. It also provides home loans through a wholesale network of brokers and correspondents in all 50 states, as well as 92 retail locations in 31 states, representing the combined retail branches of Flagstar and its Opes Advisors mortgage division. Flagstar is a leading national originator and servicer of mortgage loans, handling payments and record keeping for $104 billion of home loans representing over 470,000 borrowers. For more information, please visit flagstar.com.